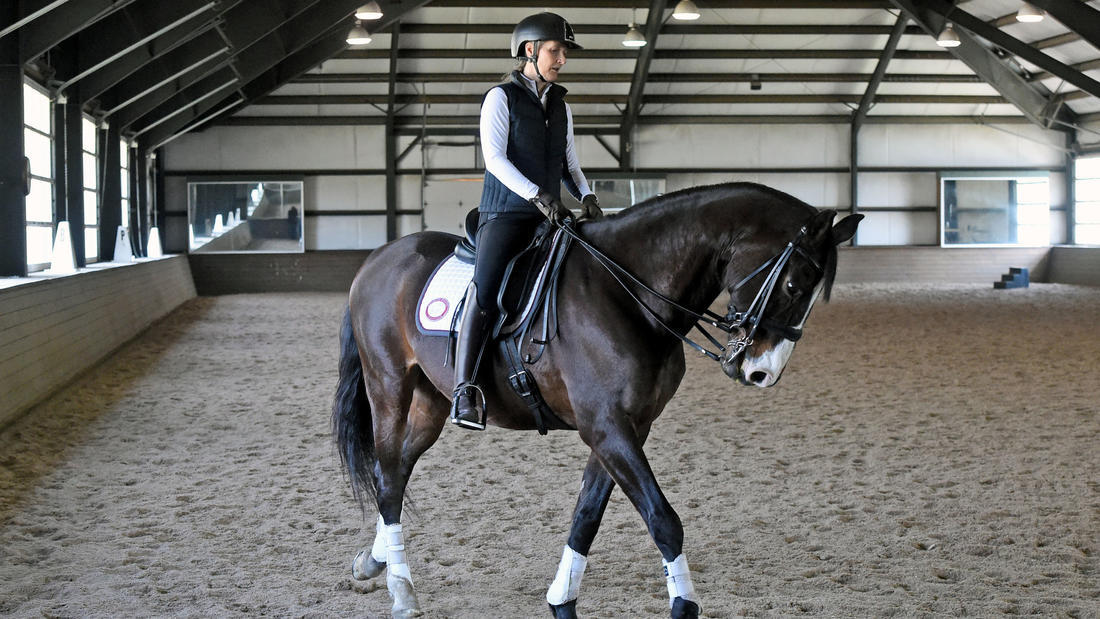 At the institute tucked down a private road off of Forest Drive, Annapolis’ top athletes and Olympians get daily massages, acupuncture, specialized diets, medications and supplements, and gear that costs thousands of dollars a piece.

The Chesapeake Dressage Institute has been Annapolis’ hub for serious dressage riders over the last 15 years, with owner Janet Richardson-Pearson sparing no expense for the hooved competitors, who fetch between $15,000 and $150,000.

Dressage (rhymes with massage) combines sport and art, requiring horses to perform at the highest level of flexibility, obedience, balance and skill. The institute’s in-house trainer, Lisa Gruen, likens the sport to ballet or figure skating.

“There’s certain movements we have to take [the horses through]. It’s about finding a harmonious relationship with the horse and rider,” Gruen says.

She explained dressage, the French word for “training,” was initially used to prepare horses and riders for battle. Horses were trained to put their weight more into their hindquarters or front quarters in order to swivel their bodies quickly, ideal for dodging and executing attacks. The rider would use their seat and legs more than their arms and hands to free them up for weaponry.

The practice reached its peak in the Baroque period. As cavalry members started showing off how well-trained their horses were, it became an exercise to show off the beauty of their training.

“It’s a very beautiful sport to watch. If it’s done properly, it’s the best use of their body,” Richardson-Pearson says.

Richardson-Pearson had never been on a horse until she was 35. Once she was in the saddle, she was in love. After retiring as a commercial interior designer, she wanted to be more involved with horses but couldn’t find anywhere with the level of dedication she sought.

“There wasn’t a place around that had all the things I wanted, so I created a place,” she says.

Richardson-Pearson does Pilates twice a week in a studio set up in her office before having Gruen train her on one of Richardson-Pearson’s five horses. (Two are unridable seniors — she calls them “lawn ornaments.”) In the winter, she lives in Wellington, Fla., where she sponsors dressage shows and classes. She’s also the owner of the controversial Village at Providence Point development planned near the institute.

“It was Janet’s vision to be a training facility and educate people on dressage,” barn manager Angie Burnett says. “She really makes sure she takes top-notch care of her horses. No expense is too much for their care.”

For 10 years, Gruen has been schooling horses and their riders on how to execute basic gaits like walk, trot and canter. As difficulty is increased for more advanced duos, she prepares them to pass riding tests to get to the next level.

To outsiders it may just look like fancy horse riding, but dressage is a serious sport in the equestrian world. Several Olympians and world-class trainers have traveled from across the country to attend the institute’s riding clinics, which cost $150 for a 45-minute session. Jan Brons, a lauded Dutch trainer based in Florida, recently ran a clinic at the institute.

And for serious riding, the horses need serious care. It costs at least $1,000 per month to board a horse at the institute.

For the last three years, Kelly Cox, a contractor in specialty horse services, has been treating the institute’s horses with pulsed electromagnetic field therapy to keep their muscles loose and laser therapy for injuries. Recently, she gave Ollie, a 7-year-old Hanoverian horse, an electromagnetic “massage” treatment in his stable. Ollie’s muscles pulsed under the large U-shaped ring as it moved around his body.

The therapy is also used to treat human athletes and depression patients. Cox says she uses the same machine pulsing on Ollie on her own back sometimes. The horses also get acupuncture and hoof massages to keep them in peak condition.

“It’s a spa. They get treated better than humans, they really do,” Burnett says.

She’s in charge of all the horses’ health care as well as upkeep of the entire institute.

“It’s so much more than getting on the horses and riding,” Burnett says. “There’s so much that happens behind the scenes that people don’t know about.”

Part of Burnett’s job is keeping track of every horse’s specialized diet. Each meal is tailored to the horse’s training, with a specific mix of fat and sugar, or “fuel” and “balance” as Burnett says. Each horse also gets electrolytes and supplements like selenium E for immunity and joint care to battle arthritis. Senior horses get specific feeds for older digestive systems. While most horses eat twice a day, some of the institute’s horses eat three times a day — the Michael Phelps diet of dressage.

Along with diets and treatments, the institute’s horses have luxury hardware to help keep them in top form. The horses change their shoes like NBA players, getting a new pair about once a month. To loosen sore muscles after riding, horses are draped in magnetic blankets.

Each horse also has its own saddle, molded to fit its unique form and its rider’s. These custom saddles cost between $2,000 and $5,000 apiece, Burnett says.

The 14-stall barn and its additional senior stalls are all under 24/7 surveillance. Older, retired horses have their own stalls behind the main barn where they can go in and out as they please. (Senior horses need extra time to move around so they avoid arthritis.) The institute also has a laundry room dedicated to horse gear. Laundry is done twice a day, even more frequently in the summer, Burnett says.

Winters are tough for the institute. Drinking water and pipes freeze, and humans and horses get too cold to precisely perform moves. Horses need a lot of time in the field each day — at least six hours at the institute — but can hurt themselves in icy conditions.

Of course, the institute has tech for that. The institute combats the freeze with heated troughs and buckets. The backs of some horses get particularly tight after riding in the cold, which is where those magnetic blankets come in.

In the summer, horses with lighter markings are treated with sunscreen before riding or spending time outside. Mesh sheets and face masks are donned like battle armor when flies get particularly bad— another privilege the average horse doesn’t usually get.

“They’re spoiled, but a lot of these horses are expensive. We try to keep them as safe as we can.”