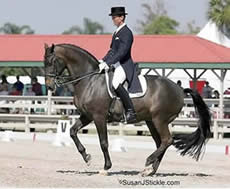 When Jan Brons asks a horse for a response from an aid, it better happen. That was one of his strongest messages repeated over and over at the Chesapeake Dressage Institute’s “Training the Trainer” clinic.
In response to expressed interest from local instructors and trainers who spend countless hours working with their students, but hardly ever get to have advanced training for themselves, we have organized a series of clinics from top level Grand Prix riders. Not only are they serious competitors in the show ring, they also are highly respected instructors, as well. Trainers were offered early registration before opening the clinic to others.
Jan (pronounced Yon), is a dedicated competitor, sometimes riding four or more horses a day in a show, as well as being a successful instructor, with a waiting list for his teaching and national clinics. Working with Robert Dover for close to a decade, he knows what it takes to be successful. With clinics in Chicago, Tennessee and California, we felt fortunate to have been included in his roster.
His instruction was clear and concise and he had riders working hard on three basics – forward, responsive and straight.
Some of his comments include statements like: