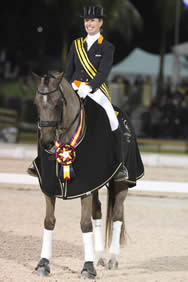 While Steffen Peters of the US won the Grand Prix in the inaugural Equis World Dressage Masters competition in Wellington, FL in January, Holland’s Anky van Grunsven won the Musical Free Style.
Anky always requests a local, quiet horse for her Victory Gallop, and CDI’s Founder and President Janet Richardson-Pearson’s horse Dax was selected! Dax is a 22 year old Schoolmaster, who has to live in Florida year round, due to his allergies. When he was taken to the showgrounds, he was quite excited and puffed up, for about ½ hour, before he realized he was now OLD. He was wonderful as Anky’s ride, and is shown with her holding her trophy. Since the following week was his birthday, there was a party and cake at the barn, and he is photographed wearing a crown. What a guy! 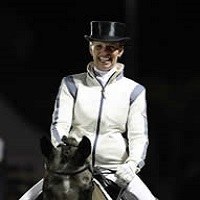 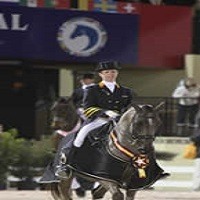 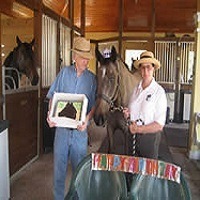